This year’s Youth Volunteer Corps Summit held in Charleston, South Carolina was my very first Summit. My program in St. Louis is brand new, and our program director recently moved. So, I was walking into my first Summit, with no other volunteers, and no program director. I was alone. Everyone else had a program director and other kids that they could hang out with, so at first, it wasn’t easy for me. I knew some of the other kids from the International Youth Advisory Board calls, but I had never met any of them in person, and we were all kind of awkward at first. Our first session of the day, we had an IYAB only meeting, and after that everyone was a little more comfortable. I ended up sitting with a couple of IYAB members in the next session, and we quickly became friends. I especially got to know one girl in particular, Sarah. It was so crazy we literally had so much in common.

Once I found friends, it made Summit so much fun! We walked to the Urban Farm (which was so cool!) and I learned so much. We got to build blessing boxes, pallet gardens, and learn all about the plants that they had at the Farm.  It was cool to meet a lot of the other kids from all over during the service project. 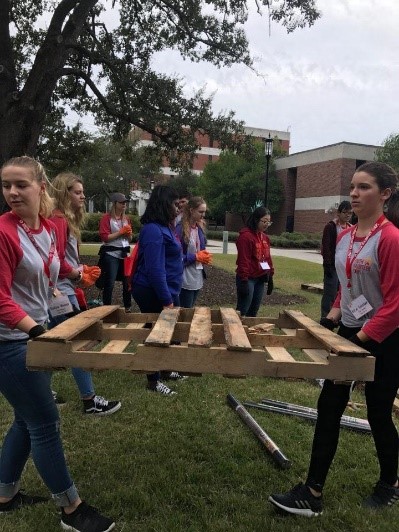 After the Urban Farm we had an IYAB dinner, which was so fun too! I got to know more of the IYAB members personally, AND we got ice cream! It was so interesting to hear about how everyone’s lives were so different, yet how we had so many things in common.

The next day was super informative. I tried to go to as many Vicki Clark sessions as I could, because who wouldn’t? She’s amazing. I learned about goal-setting and empathy and it was really cool to see how she worked that in with our volunteer work.

Next, I went to the Planning a Project session, which was probably one of my favorite sessions. It was SO fun being able to be creative and come up with our own ways to address a problem in the community, and actually planning for it with a budget and all.

That night, we had an awards ceremony and dinner where we got to recognize the accomplishments of all the amazing youth volunteers and program directors. I got to sit at a table with none other than THE Vicki Clark herself, so that was pretty great. After that, I hung out with my friends until 12:45 AM which was pretty rough considering I had to wake up at 4:00 AM for my flight, but it was all worth it and I wouldn’t trade a second of it.  I walked in to Summit not really knowing anyone, and I came out with some great friends.

Youth Voice Today is a platform that exists to amplify youth voice!

The Zero Waste Lifestyle – What is it?

The Importance of Volunteering Abroad